They're coloring pictures on the table, they’ve painted the carpet brown

The beauty parlor is headed by parents, the circus is in town

Here comes the lying president, He’s got them in a trance

One hand is tied to Valdimer, the other is in his pants

And the congress squad they're restless, they need something to vote

As Lady and I look out tonight, from Isolation Row

Cinderella, she seems so easy, “It’s Disney, it’s not free " she smiles

And puts her hands in your back pockets all gangster style

And in comes Rush, he's moaning. “I say Hoax and you Believe"

And someone says, "You're in the wrong place, my friend, you'd better leave"

And the only sound that's left after the ambulances go

Is Hospital staff sweeping up in Isolation Row

Now the moon is almost hidden, the stars are beginning to hide

The fortune telling lady has even taken all her things inside

All except for Hobby Lobby and a few states insane

Everybody is making due and all expecting pain

And there’s Jimmy Kimmel, he's dressing, he's getting ready for the show

Amelia, she's inside the window for her I feel so afraid

On her eighty-second birthday she is so utterly dismayed

To her, death is quite romantic she wears an cotton mask

She professes her religion, her sin is her lifelessness

And though her eyes are fixed upon Noah's great rainbow

She spends her time peeking from Isolation Row

Fauci, disguised as Super Man with his memories in a trunk

Passed this way an hour ago with his friend, a pious skunk

Now he looked so immaculately frightful as he palmed his face

And he went off sniffling droplets and looking for breathing space

You would not think to look at him, but he was famous long ago

For playing the electric sars vaccines on Isolation Row

Dr. Desai he keeps his Fox inside of a leather cup

But his Osmisos patients, they're trying to slow it up

Now his nurse, some local winner, she's in charge of the corona hole

And she also keeps the cards that read, "Have Mercy on our Souls”

They all play on the penny whistles, Fox News hears them blow

If you pull your head out far enough from Isolation Row

Across the street they've nailed the coffins, they're getting ready for the end

And the Phantom's shouting to nation mass, "Get outta here if you don't know"

The Orange One is just being punished for ignoring Isolation Row

At midnight all the doctors and the superhuman crew

Then they wish from the factory send more respirator machines

They strap two together cross their fingers and quarantine

Check to see that nobody is escaping from Isolation Row

Praise be to Trump’s DeSantis, the Holland sails at dawn

Everybody's shouting, "Which side are you on?!"

Broward County and DeSantis fighting in the captain's tower

While calypso singers die for aboard and fishermen hold flowers

Between the windows of the sea where lovely mermaids flow

And nobody has to think too much about on Isolation Row

Email ThisBlogThis!Share to TwitterShare to FacebookShare to Pinterest
Labels: parody

Posted by Dave Schipper at 10:14 AM No comments:

Let me walk (a nod to the Man in Black)

Oh mystery, don’t bury me In your hands, In your hands Take me back, face the facts I am weak, I am weak Let me walk in your grace
Let me feel the air of peace Let me stand for what is right Let me walk in path of light A child’s face, a worn out place In our hands, In our hands On TV screens and in my dreams My heart hurts, my heart hurts When morals are lost To the wealth of gain He finds no host In this evil game Take me back, the man in black Hold our hands, hold our hands Speak gentle words, now rarely heard Mend our hearts, mend our hearts Chorus (c) Dave Schipper 2019 Rose Riversongs
Posted by Dave Schipper at 8:51 AM No comments:

Angels in action
Need a reaction
Puppies on a string

Lightning in motion
Needs a commotion
Wild flowers in spring

Take me and gently
Whisper faintly
I hold to the wire

Posted by Dave Schipper at 10:18 AM No comments: 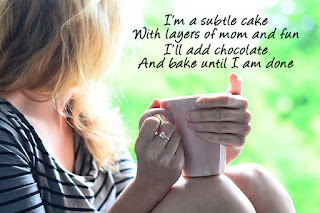 This summers day,
You will not find me!
Off the grid and in hiding
Lost in Earl Grey tea

The struggle is real
She pulled him out, He falls back
As part of the deal
He’s so grateful

Posted by Dave Schipper at 8:32 AM No comments:

Down the road, again

Email ThisBlogThis!Share to TwitterShare to FacebookShare to Pinterest
Labels: blues

There she goes out the door

as she’s done times before
Not with me, she’s just free
Lil' dancer Liza Lee


The band wants to play more

The ready boys take note
And her tattoos they quote
"Love me for who I am
Not who you want me to be."

Yet this bright butterfly
Flirts and flutters on by
Out the door as before
She's just free Lil' Liza Lee.

Posted by Dave Schipper at 8:11 AM No comments: 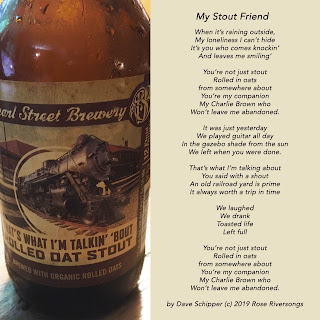 Posted by Dave Schipper at 1:17 PM No comments:

I didn’t win you as much as pick you up
I showed you friendship that wouldn’t stop
Even gave you that alone space
Plus, I’ll do it all with grace

Posted by Dave Schipper at 1:16 PM No comments:

I’m good with the crumbs of your lifeAs you add layer and layer of icingThe base holds a strong foundationWhere once I was offered a huge sliceI'm content to lick my fingers of icingWith joy and jubilationYes I would relish a full servingAn hour of talking and listeningTill then, my crumb celebration

Tell me your wildest dreams
Tigers, and bears oh my
Tell me your softest desires
Pillows, flowers and cat fur

Now that you’re refreshed
Grab the wheel and drive
Polite and not in a rush
I love you and want you to...

Words all have several meanings

She let it sit for a few days
Then gently opened the lid to say
“You are nothing and everything to me,
Please leave me but never go away.”

She stopped right there and hit send.

He died thinking his thoughts confirmed.

Posted by Dave Schipper at 10:29 AM No comments:

Wind, the source of comfort on a hot day.

The cause of the snow spray

The generator of power seen from the highway

The dustball rolling on the spillway.

Your are my friend and my nemesis

The cracking of trees limbs

The interruption to a good concert

The transporter of seeds

Good ones and weeds.

Or as gentle as a dream.

Carry me away to the next place

Lure me with a caress to my face